A former cop, café magnate and IT professional have organised a petition and draft legislation to regulate what they call legislative “double standards” surrounding e-scooters and other small electric devices operating in South Australia.

Michael Page yesterday told the Public and Active Transport Parliamentary Select Committee that if he didn’t jump on an electric skateboard years ago, his mental health would still be suffering.

“I began to reclaim my sanity and build a foundation to better my mental health,” the IT expert tells the body, which is tasked with investigating e-scooter use and potential opportunities for expansion or further regulation, of when he began commuting to work on the small – but illegal – personal electric vehicle.

“I didn’t anticipate how it will transform my life.”

Despite commercial e-scooters littering North Adelaide and the CBD, it is illegal for Michael to ride his electric skateboard on public streets. Privately owned “motorised scooters” are not allowed to operate on a road or road-related area, according to the South Australian road rules.

Michael also heads up local e-scooter advocacy group SAESK8, which “for years” has attempted to address the legislative “double standard” of commercial e-scooter companies – after acquiring council permits – rolling out their devices in allocated areas while private operators are locked out, he tells Parliament.

“I personally have been fighting for the legalisation of privately-owned devices for the last two [years],” he says.

“We were largely ignored by the previous Marshall Liberal state government.

“Instead, priority and attention was given to the commercial operators of the e-scooter rental schemes that currently exist in various council jurisdictions in the Adelaide metropolitan area.

“We wish for our devices to be included in the law and we urge you to recommend the government pass legislation and apply laws that will allow us to operate in public.”

We do have members of the group who say, ‘Well, somebody has to take the hit to make this a public issue’.
—John Bolton

SAESK8 is also part of a national lobby group Electric Riders Australia, which aims to represent a unified national voice for the mode of micro-transport.

The city’s e-scooter trial, which commenced in February 2019, only allows e-scooters by Singapore-owned companies Beam and Neuron to operate in the postcode 5000. They pay $1530 per week to the City of Adelaide in permit fees.

Michael says public opinion of private electronic devices has been “tarnished” by the “low skill and safety level” of those hopping on commercial e-scooter devices.

University worker Diana Reed is one pedestrian-turned-activist who was allegedly hit by a commercial e-scooter rider in February, and the last time we spoke to her was still managing the pain from her injury.

Michael is one of three stakeholders agitating on a South Australian legislative level for the regulation of small electric vehicles, such as personal mobility devices.

Former cop and Gawler lord mayoral candidate John Bolton is also part of the call to action. He tells CityMag he and SAESK8 organised a petition – which attracted 600 signatures – seeking legislative reform.

The petition is now sitting with the Minister for Police, Emergency Services and Correctional Services, Joe Szakacs.

When CityMag asks the Minister’s office when the petition would be tabled in Parliament, he responded in a statement saying he confirmed he had the document and appreciated the “positive engagement” he had with the group.

“To commence in the new year following the conclusion of the current parliamentary inquiry, the review will analyse current legislation, new laws, as well as Australian Road Rules and barriers to public liability insurance to keep device users and pedestrians safe,” the Minister says.

“I have had positive engagement with groups that are advocating for changes in this area and I welcome all views as part of this important community debate about how to best regulate the safe use of these devices into the future.”

John, who is a barrister by day and for seven years has got around on an electric skateboard, says the drafted legislation, which is also sitting with the Minister and was co-authored by SAESK8, makes three points.

These points emphasise the responsibility of the rider, differentiate those on personal devices from those on commercial devices, and mimic recommendations set out in the National Transport Committee’s (NTC) recent report, Barriers to the safe use of personal mobility devices.

“Permitting PMDs (personal mobility devices) to travel up to a maximum of 10km/h on pedestrian infrastructure is an appropriate speed based on safety considerations for pedestrians,” the NTC report, which is mirrored in the draft legislation, states.

“For bicycle paths and local roads, a maximum speed up to 25km/h is considered safe and appropriate and there is little justification to further restrict PMD speed in these areas.

“The NTC acknowledges that to minimise the safety risks for this option there will need to be a high level of compliance and clear enforcement with the proposed road rules.”

John’s legislation, which has no legal bearing and is merely a suggestion, states a rider must be 16 years and older, not use a mobile phone, wear a fitted bicycle helmet, and clip visible lights at night to their device.

Due to such demand for a legislative report, John tells the Committee that although the infringement notices start at $870 for those who have been caught riding their personal devices in public, and the potential to lose of motor vehicle licence for up to three months, people are deliberately getting caught.

“We do have members of the group who say, ‘Well, somebody has to take the hit to make this a public issue’,” he says.

“Whereas, I don’t do that – I can just go in the parks in the back streets and for my recreational purposes, but I don’t I don’t be in your face about it. But some people are actually being crusaders about it.”

“Skateboards have no breaks, and are legally allowed to cruise down a hill,” he says.

“I’ve got young kids, and my fiancée loves to ride these things to cruise along the coasts, get out in the fresh air. I really don’t like the double standards.” 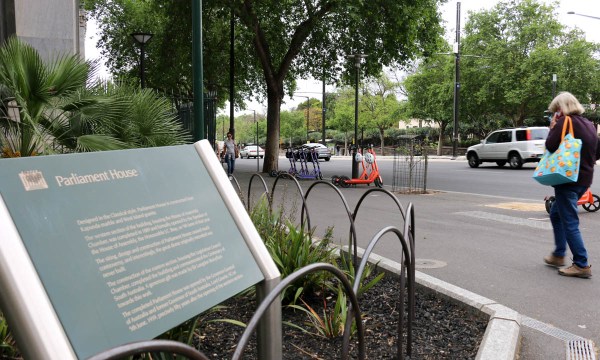